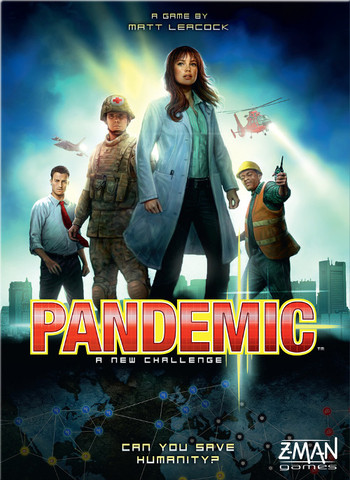 In Pandemic, several virulent diseases have broken out simultaneously all over the world! The players are disease-fighting specialists whose mission is to treat disease hotspots while researching cures for each of four plagues before they get out of hand.

The game board depicts several major population centers on Earth. On each turn, a player can use up to four actions to travel between cities, treat infected populaces, discover a cure, or build a research station. A deck of cards provides the players with these abilities, but sprinkled throughout this deck are Epidemic! cards that accelerate and intensify the diseases' activity. A second, separate deck of cards controls the "normal" spread of the infections.

Taking a unique role within the team, players must plan their strategy to mesh with their specialists' strengths in order to conquer the diseases. For example, the Operations Expert can build research stations which are needed to find cures for the diseases and which allow for greater mobility between cities; the Scientist needs only four cards of a particular disease to cure it instead of the normal five—but the diseases are spreading quickly and time is running out. If one or more diseases spreads beyond recovery or if too much time elapses, the players all lose. If they cure the four diseases, they all win!

The 2013 edition of Pandemic includes two new characters—the Contingency Planner and the Quarantine Specialist—not available in earlier editions of the game.

Misprinted Boards In some copies of the 2013 edition, the board contains a misprint where the link between Lagos and Sao Paolo is missing. Z-Man Games will replace the misprinted board with a correct copy. More information: 1

Q: I have 2 of the same card but am missing another card!
A: Allegedly during collation of the decks, some of the cards were duplicated or missed. You should have 1 for each city in the Infector deck (48 total) and 1 for each city in the Player deck (48 total). There should also be 6 identical Epidemic cards, 5 distinct Role Cards, 5 distinct Special Event cards, and the 4 Reference cards for a total of 116 cards. If you are missing any cards, contact Z-Man games and they will replace them.

Q: Why is the start city Atlanta?
A: Atlanta is the home of the Centers for Disease Control and Prevention (CDC).

Q: Can you pass cards when it is not your turn?
A: The active player may spend one action point to give -or- take a city card. Standard passing rules still apply.

Q: Can Special Event Cards really be played at "any" time?
A: (Quoted from game designer Matt Leacock) You can play the cards at any time, however, you can't play them between an event and the representation of the event on the board. Some scenarios may help explain this:

Scenario 1:
Player #1 has a Special Event card for "Resilient Population." During the draw, an Epidemic card is drawn. Since an Epidemic card was drawn, player #1 decides to play their Special Event card to remove a city from the infection discard pile before they are reshuffled. This is legal because the card was played before the cards were reshuffled.

Scenario 3:
The Red disease has been cured. A player draws the Taipei card which results in the 8th Outbreak. Since no time elapses between the drawing of the Taipei card (resulting in the infection) and the placing of the cubes (representing the infection), the players lose the game. It's not OK to Airlift the medic over to Taipei to cure because the cubes have already been added and the game has already been lost.

Q: Our first game was easy! Are we doing something wrong?
A: Probably. But the game is easier with fewer players and/or fewer Epidemics in the deck. You may also visit this thread to see if you missed something: Common mistakes.